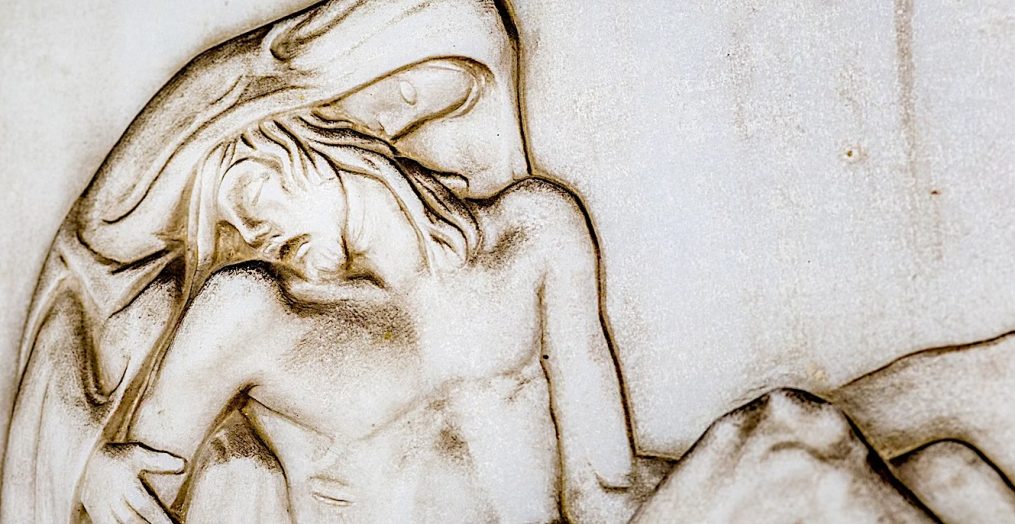 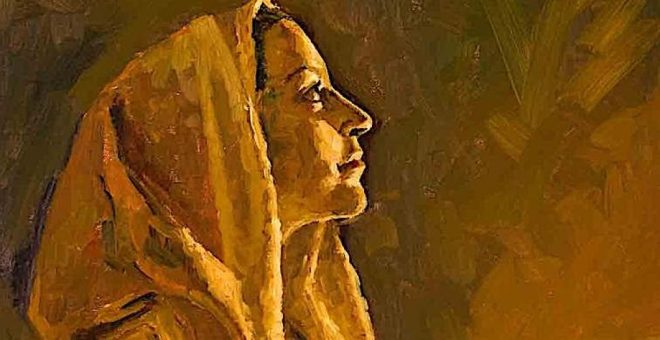 A Salutation to the Blessed Virgin
By Jacopane of Todi

Hail, Virgin, Holy Blessed Mary!
You carry God within you, God and man,
and the weight does not crush you.
Miraculous virgin birth:
the child born from the sealed womb!
The infant joyously leaving the castle,
through the locked gates,
for it would not be fitting for God
to do violence to the womb that sheltered him.
O Mary, what did you feel
when you first saw him?
Did love nearly destroy you?
As you gazed upon him,
how could you sustain such love?
When you gave him nourishment,
how could you bear such joy?
When he turned to you and called you Mother,
how could you bear being called the Mother of God?
O Lady, I am struck mute
when I think of how you looked on him
as you held him and tended to his every need.
What did you feel when you held him close?
The love that bound you makes us weep!
O warm and blessed heart, inflamed by love,
how is it that love did not consume you?
Fortitude sustained you and steadied your burning heart.
But the humility of the child dwarfed your own.
With your acceptance, you ascended into glory.
By contrast, he humbled himself
and descended upon our wretched state.
Compared to his humility in becoming human,
all other humility is nothing but pride!
Come, one and all, come running together!
Come and see Eternal Life in swaddling clothes!
Take him in your arms!
He will not run away from you!
He has come to redeem!
He has come to save all who have lost hope!
Glory to the Father, to the Son, and to the Holy Spirit;
as it was in the beginning, is now, and will be forever. Amen.

More than eight centuries after his death, Jacopane of Todi (1230-1306), the author of this Salutation of the Blessed Virgin Mary, remains something of a puzzle to the Franciscan family and to the Church universal. Because Jacopane died on Christmas Day, he is venerated on December 25th, but he is not a saint; he has never been formally canonized. But since his death, he has been commemorated as Blessed Jacopane in his hometown of Todi, Italy (which is located approximately thirty-five miles southwest of Assisi) and by all of the Franciscan orders throughout the world.

Jacopane was a prominent and prosperous lawyer who was married to a young noblewoman. Vanna, his wife, was known locally for her beauty, generosity, and deep faith. By contrast, Jacopane was known for his greed, worldliness, and lack of faith. Tradition holds that shortly after their wedding, Jacopane convinced his wife to attend a local festival or tournament. While he transacted business in the town square, his wife was seated upon a stage that collapsed under the weight of spectators. Jacopane found Vanna mortally wounded and wearing a hair shirt (penitential garment) in atonement for her husband’s many sins.

After her death, Jacopane suspended his law practice, gave away his fortune, and dressed himself as a penitent. He then wandered the countryside in grief and prayer. Soon after, he joined the Third Order of Saint Francis of Assisi. During this period of life, Jacopane of Todi was regarded as a lunatic. He was often called “Crazy Jim.” He was known to act out private spiritual visions in public places. He sometimes appeared naked in the town square, crawling on all fours, and wearing the gear of a mule or work horse. He even appeared at his brother’s wedding tarred and feathered from head to toe. Such acts of humility and piety may have brought him closer to God, but they made him an outcast among his family, friends, neighbors, and former partners in business and law.

After ten years as a penitent, Jacopane applied for admission to the Order of Friars Minor which was founded by Saint Francis of Assisi in 1209. At first, because of his reputation, the friars denied his request. But after he wrote a poem about the sins and temptations of the world, he was accepted in 1278 and lived as a lay brother. By this time, divisions had developed among the followers of the Poor Man from Assisi. One faction sought to modernize and modify the Rule of Saint Francis so that it might be easier to follow. Another faction, known as the Spirituals, insisted that the Rule should be lived strictly according to its original intent. Jacopane joined the Spirituals which asked for the pope’s permission to break away in order to live a more austere life of poverty, chastity, and obedience.

Pope Celestine V was sympathetic to the Spirituals but resigned the papacy before he could formally approve and seal their request to form a new order. His successor, Pope Boniface VII denied their request. In response, Jacopane, who was gaining a reputation as a poet and writer, drafted a series of poems that criticized the Church’s hierarchy for its worldly ways. Bonifact VII then excommunicated Jacopane and the Spirituals. As punishment, he was arrested and imprisoned in a papal prison for nearly five years. When Pope Boniface died, Jacopane was released from prison, but his health and spirits were devastated. He retired to a convent near his hometown where he was cared for by the Poor Clares.

Jacopane of Todi died just after midnight on Christmas Eve 1306. It is said that he died first weeping then smiling after having sung the Stabat Mater and then the Gloria from the Midnight Mass for Christmas Eve. Indeed, he is perhaps best remembered for his composition of the Stabat Mater which is so often chanted during the Holy Season of Lent at the Stations of the Cross. Blessed Jacopane is venerated today both as patron of the Comune di Todi and as among the patrons of the First Order of Saint Francis. Members of the Assisi Project like to think of him as a patron of reformers in the Church: those among us who pray and push and pray some more for a church that truly practices what it preaches: love of God and neighbor; forgiveness, mercy, and reconciliation; kindness, generosity, and an openness and mutual respect for all people everywhere. This Christmas, may Jacopane of Todi pray for us as we work to heal God’s family and rebuild our wounded Church.

Founded in 2007 by Father Jim and Cliff Garvey after their first pilgrimage to Assisi and Rome, the Assisi Project is a Fellowship of Franciscans in Spirit with friends and followers in the United States, Canada, Africa, and Europe. Our mission is to help adults of all ages more faithfully live the Gospel of Christ and grow closer to the Church through the inspiration and intercession of Saint Francis and Saint Clare of Assisi.

The Assisi Project meets on the last Saturday of every month in Saint Ann Church (located at 74 Pleasant Street in Gloucester, Massachusetts) for the Celebration of Mass, formation, fellowship, and faith sharing. Our next “Saturday Morning with Saint Francis” is January 26th beginning at 8:00am. This month, we will continue our reading and reflection on the saints, including Brother Juniper and Angela of Foligno. All fellow parishioners are invited to join the Assisi Project! You do not need to travel with us to Assisi to be a member of the Assisi Project!

Founded in 2007, the Assisi Project is a Fellowship of Franciscans in Spirit with members, friends, and followers in the United States, Canada, Europe, and Africa. We are dedicated to helping Christian believers of all ages to more faithfully live the Gospel of Christ in the spirit of Saints Francis and Clare of Assisi. For more information about the Assisi Project and upcoming opportunities for faith formation, prayer, and pilgrimage in the Franciscan spiritual tradition, please contact Cliff Garvey at cgarvey@assisiproject.com. May the Lord give you peace!