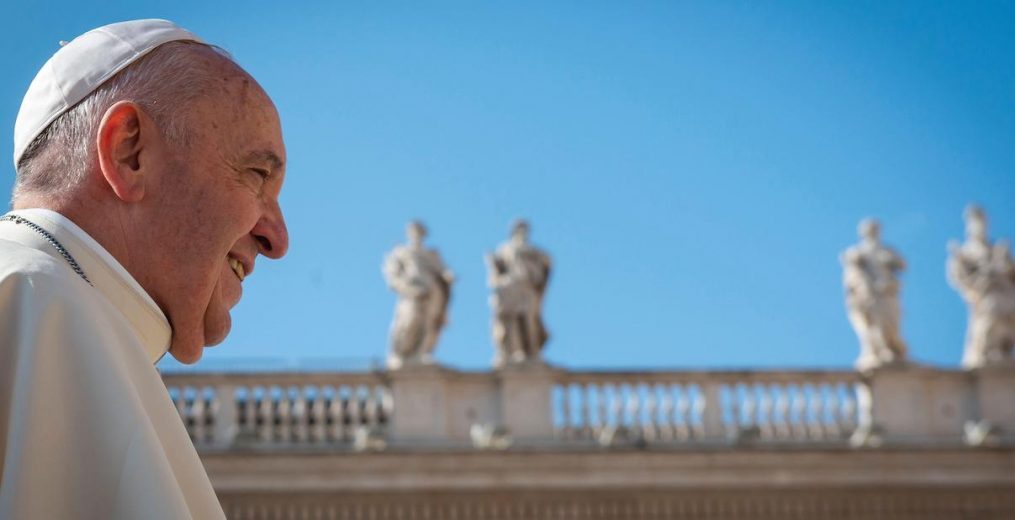 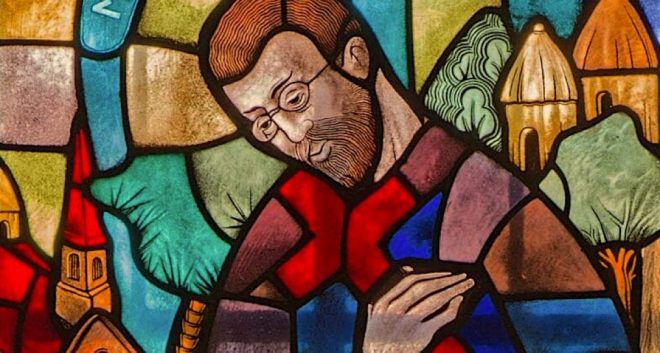 When Mother Teresa of Calcutta received the Nobel Peace Prize in 1979, she said: “I choose the poverty of our poorest people. I am grateful to receive this award in the name of the hungry, the naked, the homeless, the crippled, the blind, the lepers, and all of those people who feel unwanted, unloved, and uncared for in our society; people that have become a burden and are shunned by everyone.” What Mother Teresa did for the poor in India during the late twentieth century, Damien of Molokai did for the sick in Hawaii during the late nineteenth century.

But unlike Mother Teresa, whose Missionaries of Charity spread her vision throughout the world, Father Damien and his ministry were literally confined to one isolated part of Molokai, one of the eight Hawaiian Islands. Through that ministry, ever focused on those who suffered right before his eyes, Father Damien has much to teach us about healing God’s family and rebuilding the Church during these troubled times.

John Francis de Veuster was born on January 3, 1840 in a small farming village in the Flemish region of the Netherlands. John was the youngest of seven children. He was an average, but hardworking student. His parents assumed that he would inherit the family farm, but he insisted on following his brother and two sisters into religious life. He was accepted into the Congregation of the Sacred Hearts of Jesus & Mary; and he took the name of Damien as a sign of his devotion to Saints Cosmas and Damien, third century Arab Christians, physicians, miracle workers, and martyrs.

It is unclear whether Father Damien prayed for a missionary assignment in Hawaii or whether he was sent because no one else was willing to there. But in March 1864, he arrived in Honolulu. Two months later, he was ordained to the priesthood and assigned to parish ministry on the big island of Hawaii. At the time, Hawaii was a British colony, but the islands were still ruled by a local king.

The arrival of Europeans was not kind to the indigenous people. Because they had never been exposed and thus had never acquired an immunity, thousands of Hawaiians were dying from European diseases. Colonists, mariners, and traders brought cholera, influenza, smallpox, and venereal diseases to the islands. They also brought leprosy. Science not teaches us that 95% of human beings are immune to leprosy; and the disease is now easily treated. But in the late 1800s, leprosy was considered contagious, incurable, and terminal.

Leprosy or Hansen’s Disease is a bacterial infection that if left untreated causes skin lesions that eventually kill human flesh. Leprosy often attacks the extremities, eyes, and respiratory system. Left untreated, it can lead to loss of feeling and paralysis, blindness, and eventually death by suffocation.

In 1865, under pressure from the British, the Hawaiian legislature enacted An Act to Prevent the Spread of Leprosy. The new law required anyone diagnosed with leprosy (correctly or incorrectly) to be forcibly exiled and confined to an isolated peninsula on the island of Molokai. Eventually, more than 10% of the indigenous population was rightly or wrongly diagnosed with leprosy and sent away. The lepers included children, parents, and the elderly. No one was spared. There were no second opinions, no appeals, and no exemptions. Husbands were separated from wives. Children were separated from their parents. Families were torn apart. Being branded a leper and exiled to Molokai was a death sentence.

When the Roman Catholic Bishop of Honolulu determined that the lepers needed a priest, he asked for volunteers. Father Damien was the first to volunteer and he arrived at Molokai on May 10, 1873. Long after his death and canonization, this would become his feast day.

Biographers say that Father Damien prepared for the worst, but his first encounter with the lepers and their living conditions was far worse than he ever expected. Jan de Volder writes: “The five hundred lepers in the colony were in very bad condition. Many were in the final stages of leprosy, their hands, feet, and faces horribly maimed. The festering sores and lumps caused by the disease emitted an unbearable stench. Every day, someone died of the disease. The body of the unfortunate victim was wrapped in the equally foul blanket on which the person had been lying…The wrapped body was hung from a pole and carried away by a few chosen lepers who still had sufficient strength. Often it happened that the dead were not buried deeply enough, and at night wild pigs would dig open the graves and eat the rotting flesh. Even the graves that were not ripped open spread a suffocating odor (Source: The Spirit of Father Damien).”

Despite a natural aversion to the repulsive wounds and smells, Father Damien anointed the sick and buried the dead. He helped build gardens, homes, a hospice, and a church. He lived with them, celebrated with them, cried with them, prayed with them, and consoled them. He held the sick child who was torn from his mother’s arms. He embraced the father who was arrested and taken from his family. He comforted the aging spouse who was separated from all that she had ever loved. And he counseled the addict who had turned to drink or drugs to take away the pain of illness and exile.

Father Damien also became a tireless advocate for the lepers of Molokai. He begged, borrowed, complained, and harassed every bishop, superior, and politician who crossed his path. He enlisted journalists to spread the word about conditions on Molokai and prepared lists of food, medicines, building supplies, and other resources that were not being provided adequately by local officials or the institutional church.

Although Father Damien’s assignment to Molokai was meant to be temporary, he decided during his first week that he could never leave. He told his bishop: “I wish to sacrifice myself for the poor lepers. The harvest here seems ripe.” In 1884, eleven years after Father Damien began his ministry with the lepers, he burned a foot with scalding hot water, but felt no pain. He realized then that he was infected with leprosy. As his condition worsened, he continued to work harder than ever.

On April 15, 1889, Father Damien died of leprosy at the age of forty-nine. He did not die in vain. Father Damien’s work was continued by Sister Marianne Cope and the Sisters of Saint Francis who joined his ministry one year before his death, cared for him during his final illness, and continued his work well into the twentieth century. Sister Marianne was canonized by Pope Benedict XVI in 2012 on the same day as Father Damien. Saint Damien of Molokai and Sister Marianne Cope are venerated as patrons of the sick, especially lepers, outcasts, and victims of HIV-AIDS.

During these difficult days, Saint Damien, sometimes called a Martyr for Charity, has much to teach us about healing God’s family and rebuilding the Church. He reminds us that prayer is both foundation and fuel for the life of discipleship. It is prayer than empowers us to carry our cross wherever it leads. He reminds us to be patient, persevering, and outspoken in the face of injustice. He reminds us to give, to love, and to serve without counting the cost. He reminds us to love and serve those who stand before our eyes, in our own communities, with their arms outstretched in desperate need of our help. Like Saint Teresa of Calcutta, Saint Damien of Molokai reminds us: do not wait for leaders. Forge ahead, alone if necessary, person to person. Preach the gospel in word and deed. Preach the gospel with your whole life.

At every homily, Father Damien began with these words: “My fellow lepers…” Across vast oceans and long years, Father Damien speaks now to us, friends all, neighbors all, sinners all, angry and alone, beaten and broken, fearful and uncertain, grieving and disillusioned, longing for love and community and a share in God’s kingdom. And he proclaims the Gospel of Christ: “This is my commandment, that you love one another as I have loved you. No one has greater love than this: to lay down one’s life for one’s friends.” Glory to the Father, to the Son, and to the Holy Spirit; as it was in the beginning, is now, and will be forever. Amen. Saint Damien of Molokai, pray for us! Saint Marianne Cope, pray for us! Our Lady, Help of the Sick, pray for us!

About the Author & Presenter

Cliff Garvey is a co-founder of the Assisi Project. He is a graduate of the University of Southern Maine, Saint John Seminary College, and the Catholic University of America. Cliff is a spiritual director, retreat leader, writer, and university lecturer. He also serves as Associate Minister of the Catholic Community of Gloucester & Rockport in Massachusetts where his ministry focuses on adult faith formation.

Thank you for listening to the Assisi Project Podcast: Saint Damien of Molokai, Martyr for Charity. This audio recording is produced by the Assisi Project, Inc. For more information about the Assisi Project and our ongoing programs and ministries for adults of all ages and backgrounds, please contact Cliff at cgarvey@assisiproject.com. Copyright 2020. All Rights Reserved. May the Lord give you peace!

Founded in 2007, the Assisi Project is a Fellowship of Franciscans in Spirit with members, friends, and followers in the United States, Canada, Europe, and Africa. We are dedicated to helping Christian believers of all ages to more faithfully live the Gospel of Christ in the spirit of Saints Francis and Clare. The Assisi Project is a non-profit, tax exempt charitable  organization. All are welcome to support our ministry via PayPal or smile.amazon.com; or by sending a donation to the Assisi Project, Post Office Box 3158, Gloucester, Massachusetts 01931-3158. For more information about the Assisi Project and our upcoming opportunities for formation, prayer, and pilgrimage, please contact Cliff Garvey at cgarvey@assisiproject.com. May the Lord give you peace!